Learn how to make dry latik with this easy one-ingredient recipe. This latik makes a perfect topping for many of your favorite Filipino kakanin. You can make this with coconut cream or coconut milk.

What is dry latik?

Latik is a Filipino term that refers to two different types of coconut-based by-products:

What we are making today is the dry version which is also called Tagalog latik or coconut curds.

What do you need to make dry latik?

To make dry latik, you can use either coconut milk or coconut cream. What is the difference you ask?

Coconut cream is thick and rich. It contains pure coconut milk and less to no water. Thus, requires less cooking time to extract the coconut curds.

Coconut milk on the other hand has a thinner consistency containing coconut milk and a higher amount of water. Hence, it will take a while to reduce and produce coconut curds.

Tips on choosing the best-canned coconut milk or cream

Freshly extracted coconut milk has the best flavor. There I said it!

But if you're in the U.S. or in a non-tropical country, fresh coconut milk will definitely be hard to find. Thus, canned coconut milk/cream is obviously your best choice.

Always check the list of ingredients at the back level when buying canned coconut milk. It should, at the minimum, only have coconut milk and water. If it contains thickeners (e.g. xanthan gum, guar gum, or carrageenan) it will not work i.e. it will not curdle.

Sadly, I used the wrong kind and it went straight to the bin after a few minutes of boiling.

What is the cooking time of latik?

It should roughly take 30 minutes to 45 minutes to produce the coconut curds. This will vary depending on the amount and whether you're using coconut milk or coconut cream. It will also need extra time if you prefer a darker color latik (not burned)

How to prevent burning the latik?

Once the coconut milk/cream starts to boil, lower the heat to medium to low heat. Stir steadily. Do not leave it unattended for more than 1 to 2 minutes

How do you know when latik is done cooking?

The oil will start to appear once all the liquid/water has evaporated. The coconut curds will start to appear. It will be lightly colored then gradually turn to light brown, then to caramel brown then a little darker than caramel. The final stage is brown.

You can decide to stop cooking when it starts to turn into caramel brown which was I did or continue cooking until it's brown. Completely your choice.

This latik can be use as a topping for these these Filipino kakanin: 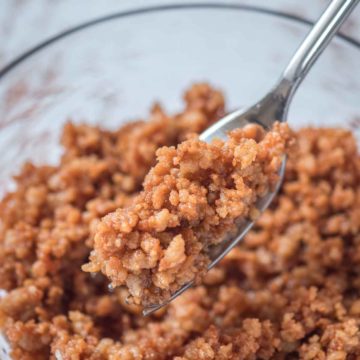 How to make Latik (dry)

This recipe yields about 1 cup of dry latik and makes a perfect topping for many of your favorite Filipino kakanin. You can make this with coconut cream or coconut milk.
prep 2 mins
cook 45 mins
author: Mella
Servings 6 servings
tap to scale
PRINT RECIPE Rate this Recipe
Prevent your screen from going dark

My name is Mella and welcome to my blog. Here I share Filipino, Asian, and many easy-to-follow recipes. Enjoy and happy cooking!