Jump to Recipe • Jump to Video

Learn how to make maja blanca with canned cream-style corn. Soft, silky, and tender pudding that is not too sweet and packed with corn flavor. Top with traditional latik or grated cheese to make it simpler.

Maja blanca is a Filipino dessert primarily made of coconut milk and corn thickened with cornstarch. It's sweet with a delicate corn flavor. The texture is soft and silky, slightly firmer than your regular pudding–basically like a thick gelatin.

This is actually one of my husband's favorite Filipino desserts. He loves it so much that he prefers it to be his "birthday cake" rather than an actual flour cake.

Why you'll love this recipe

And here's what you need to make this Filipino corn pudding:

How to Make the best Maja Blanca

Here's how to make it!

Why did my maja blanca not set?

Making maja blanca is incredibly easy but a few minor mistakes can lead to undesirable results.

Here are some tips to make sure that your maja blanca is fully set, yet still tender and light.

Once the pudding is set, sprinkle with any of these toppings:

Keep refrigerated until it's ready to serve. It should last for 3 to 4 days.

Note that the texture of maja blanca will be firmer when it's cold and fresh out of the refrigerator. "Dechill" for 20 minutes at room temperature if you prefer a softer texture.

Watch How to Make it 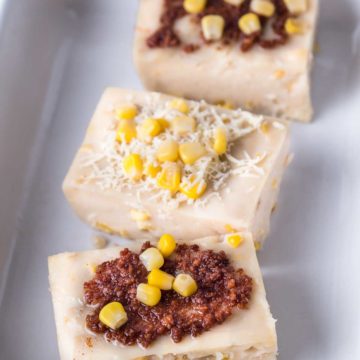 This is a classic Filipino dessert made of coconut milk and corn thickened with cornstarch. It's firm enough to hold its shape yet still soft, silky, and tender. This maja blanca recipe is far less sweet and packed with corn flavor. Sprinkle with latik, or grated cheese to make it simple.
prep 10 mins
cook 10 mins
5 from 2 votes
author: Mella
Servings 12 servings
tap to scale
PRINT RECIPE Rate this Recipe
Prevent your screen from going dark

Originally published Sept 2020. Updated August 2021 with new photos, video, and a streamlined recipe after further testing to improve the recipe!

Riverten Kitchen is a participant in the Amazon Services LLC Associates Program, an affiliate advertising program designed to provide a means for sites to earn advertising fees by advertising and linking to amazon.com.

My name is Mella and welcome to my blog. Here I share Filipino, Asian, and many easy-to-follow recipes. Enjoy and happy cooking!